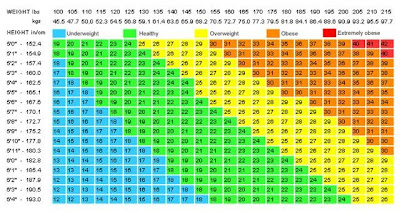 I went to the doctor's office a few weeks ago for my annual check up and the Doctor and I chat and he said that you look very fit, healthy "etc". All is well I am in good shape....in my opinion probably the best shape of my life. As a young woman I was an athlete and in good healthy shape but pretty much after getting married, having children and a very busy life I didn't do very much healthy. Then when all of that changed, I realized I was not in the best shape and could loose a few (many) pounds. Anywho, so while there at the Doctor's office I checked out the BMI chart and according to it I am within the normal range by a 1 point. One more point I am considered overweight. Which I find very interesting because I am very healthy, I eat well, drink with moderation and exercise like I want to be a TV personality (really, damn near daily). Well while reading Danielle Belton's The Black Snob's blog post I found an article regarding BMI. This is very interesting but it was printed last year, so with that said I believe they have not finalized the study but it may explain some things.
Widely Used Body Fat Measurements Overestimate Fatness In African-Americans, Study Finds ScienceDaily (June 22, 2009)
— The body mass index (BMI) and waistline measurement overestimate obesity in African-Americans, according to a new study. The results, which were presented at The Endocrine Society's 91st Annual Meeting in Washington, D.C., suggest that conventional methods for estimating body fat may need to become race-specific.
"Compared to Caucasians, African-Americans of the same age, gender, waist circumference, weight and height may have lower total and abdominal fat mass," said principal investigator and study leader Samuel Dagogo-Jack, MD, professor of medicine and chief, Division of Endocrinology, Diabetes and Metabolism, University of Tennessee Health Science Center, Memphis. "These findings argue for a review of the existing cutoffs for healthy BMI and waist circumference among African-Americans."
BMI is a simple and common method of estimating someone's body fat levels, based on that person's weight and height measurement. Obesity experts classify an adult who has a BMI less than 18.5 as underweight; normal weight is 18.5 to 24.9, overweight is 25 to 29.9 and obese is more than 30. An indirect measurement, BMI is not a reliable indicator of body fat for people who have a large body frame or lots of lean muscle. More specialized methods, such as DEXA bone density scanning or computed tomography (CT), can directly measure total and regional body fat, but these methods are expensive and more time-consuming.
The waist circumference is used to identify abdominal obesity. This fat around the middle carries a higher risk for obesity-related complications such as diabetes and heart disease. Experts define abdominal obesity as a waist circumference greater than 40 inches in men and more than 35 inches in nonpregnant women.
National data show that blacks have higher rates of obesity and type 2 diabetes than whites. Dagogo-Jack and his co-workers therefore examined whether the relationship between body fat and BMI would differ by race. In a study funded by the National Institutes of Health and the American Diabetes Association, they compared how close BMI was to body fat directly measured by DEXA in whites and blacks. The researchers performed the same comparison for waist circumference and abdominal fat. They studied 93 nondiabetic adults (53 blacks and 40 whites) who have one or both parents with type 2 diabetes. Subjects had a broad range of body weights.
The correlation between DEXA-measured total fat and the BMI was higher in whites than blacks, the authors reported. The same was true for the correlation between directly measured abdominal fat and waist size.
Therefore, body fat is likely to be lower in blacks than in whites of the same weight and height, Dagogo-Jack said. He said their data suggest that muscle mass may be higher in blacks, which would explain the dissociation between weight expressed as BMI and measured body fat.
"If our results are confirmed in a larger study population by other researchers, the obesity field will need to develop ethnic-specific cutoffs for what values represent overweight and obesity," he concluded.

Pattey
On my 50th Birthday I looked at myself and thought you can do better. So it began I started going to the gym to get in shape I promised myself I would run a race well 3 days before my 51st birthday I ran my first race and I am now running, riding, preparing for my first Marathon and TRI.